Saturday for me! I had a shit-ton of chores and errands to get done after being gone the last two weekends, but they are done! Time to listen to some Phish! High-energy Buried Alive opener?? HELLSYEAH!!! Perfect! Then they rip right into a fiery Poor Heart. Man, they must have had some energy after being cooped up in the tour bus for two days straight. The only problem I see with Austin, TX is it’s a long drive from here to anywhere interesting.

But if you want interesting, you really need look no further than the Paolo Soleri Amphitheatre! Holy cow! I would have loved to see Phish at this place. Hell, I’d love to see anybody at this place! Unfortunately, it looks like it’s been closed since 2010. There are tons of pics out there if you want to check it out. This one I found features Bela Fleck and the Flecktones onstage: 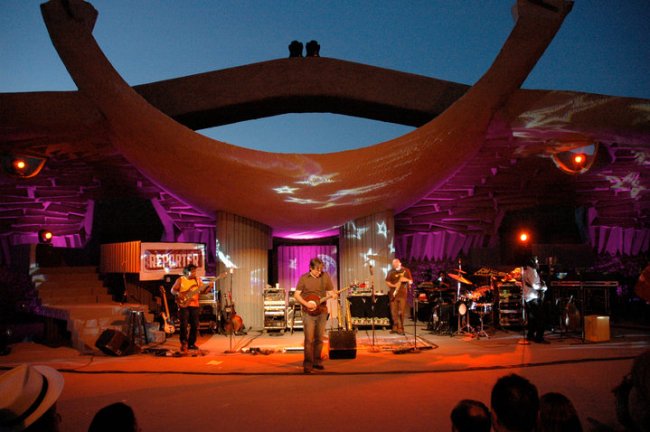 Back to my listening exercises. Gorgeous Divided Sky is an early highlight. This is a band inspired! Also, another funky-as-shit little breakdown in Ice. This one is strictly piano-driven from the get-go, but it is funky! Then another Melt that builds and build until it drops off a cliff. Interesting improv, to say the least. Another beautiful If I Could and a standard Cavern close out the set.

I’ve gotta believe the sun has set by the time this crowd is getting into this Maze. Then there’s the Wilson… You can tell Trey is clearly egging the crowd on to start the chant, but they don’t really know what to do so they start with just big “WOOOO” chants… but after a few rounds, someone must have helped them get to the “WILSON” chant. Here it is. This is the first since the Beacon chant… and the first where Trey clearly instigated it… I definitely remember Trey egging on the MSG crowd at the end of the year. I can really picture it here. Interesting! Definitely one of those little things I wanted to learn as I listen to this year of Phish.

I really try not to do a song by song review each time… But this set is chock full of highlights. The Reba jam starts out so mellow and quiet I had to turn it up just to hear what was going on. Beautiful, to say the least. The Julius is fire – even in the context of Julius. I mean, it’s just insanely high-energy. The Hood is everything you want in a Hood. Truly sublime and inspirational.

Then the acoustic segment is really beautiful. The Ginseng is cut from the recording, but the Dog Faced Boy is really sweet. And I’ve never heard a more attentive crowd for mic-free Phish. The harmonies are tight and perfect.

Then they take it all home with a short but intense Bowie and a Coil that leaves Page out there to shine.

Wow! I did not expect to so thoroughly enjoy this out of the way show. It makes sense, though. Phish always rewards the out of the way shows. I mean, there’s nothing “Bomb-Factory-out-there” on this night. But I would have walked out of this one grinning ear to ear.